Prices remained the same as in the previous year. The introduction of the OHV 500 at just 100 guineas in a rigid frame was perhaps another attempt by the Brough works to bring prices down to reach a bigger market.

Both JAP SS100 and SS80 were unchanged from the previous year. There was a significant change to the rigid frame offered with the standard OHV 680. It was an improved cradle frame incorporating a platform for the oil tank, a pivotal gearbox and detail to brake pedal and footrests. 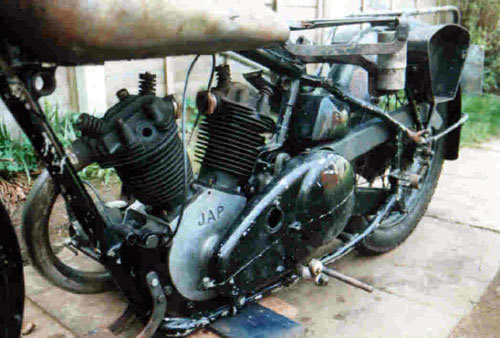 Both the OHV 680 and 500 saw the introduction of the cast aluminium primary chain case. This was horizontally split and a great improvement on the soft soldered pressed steel versions, it meant that the clutch could be run in oil for the first time.

The OHV 500 was fitted with the JAP V twin 500 which was descended from a racing version said to have been used in the 1930 TT. The Brough catalogue stated ‘this machine is convertible to a pukka racing machine quite easily by the owner’ the bike was not a success and only 9 were made of which 3 survive.

As with previous years, there was an unknown number of the 5/15 and SV 750 produced.