1925 saw 99 of the SS 80 model produced the specification remained much as for 1924 with few changes. Perhaps the most significant change for the New Year was the fitting of fully damped twin spring Webb front forks.
These were a significant improvement on the undampened Brampton no 2 forks fitted in the previous year. 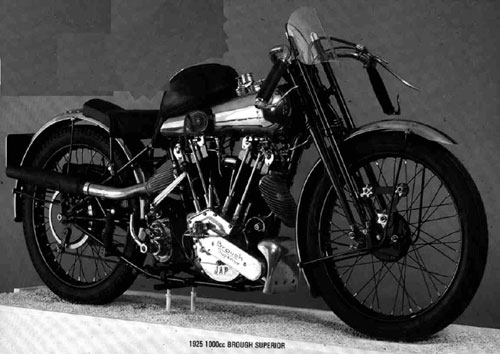 The 5/15 680 side valve was introduced utilising Mk 1 frames and fittings. The 5 was the old RAC horsepower rating, 15 was the claimed brake horsepower. Records of production numbers are missing, Ike Webb, the Brough Works Foreman, thought 200 of the 5/15 were made over the years from 1925 to 1932.

This bike has a very ‘vintage’ feel using hand oiling, dummy rim brakes and the early frame. It can be surmised that it was an attempt to capitalise on the surplus stock of parts. A considerable, but unknown number were exported to Austria to be sold by the agents in Vienna, the Meyer Brothers.

With the depression approaching to sell this number of bikes was another triumph for George Brough.

The advertisements in the motorcycle press talked about the SS100 being an exact replica of the bike used in 1924 to break 9 world speed records, including world fastest solo at 123 mph and 103 mph sidecar.

Each SS 100 came with the written guarantee that it had been timed at 100mph on a private road. It boasted that even with all this performance it was possible to run at 10mph in top gear and ride ‘hands-off’ at 90 mph.

The bike had set the standard of the ultimate ‘Superbike’ 70 years before the term was invented.

Technically it used the twin cam KTOR JAP V twin delivering 45 brake horsepower, it still used the trusty 4 stud 3 speed Sturmey gearbox housed in an enlarged cradle frame. The front forks were now the patent Castle fork. These were developed from a Harley Davidson design and gave much better road holding and performance that almost any other contemporary front fork.

The 1925 SS 100 brought together all the development work of the past couple of years coupled with the technical advances made together by the Brough works and JAP the engine manufacturer. It was the first ‘over the counter’ 100 mph bike and the whole motorcycle community lusted after one.

At this time the average motorcyclist was riding a second hand side valve machine with a flat tank and possibly belt drive. He probably earned less than £3 pounds a week and had no hope of ever owning a Brough Superior, let alone the ultimate SS 100, but he could dream. And George Brough knew this and worked on it.

There were continuing racing successes all adding to the publicity and mystique.

T E Lawrence took delivery in March 1925 of his first SS 100 known as George 4th, his three previous Broughs having been SS 80s.

The "Alpine Grand Sport" was announced at the Motorcycle Show, at the end of 1925. This offered a touring kit ready fitted to the SS 100.