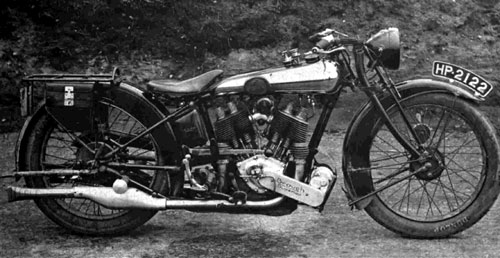 Mk 1 OHV probably out of production although still listed. It is doubtful whether any were made in 1924.

The important change was that the SS80 now featured a brand new cradle frame developed from the Le Vack Brooklands racing bike. This meant a much more stable and safer ride. With a ground clearance of 4 ¼ inches and a saddle height of 26 ½ inches the frame was a class leader. The forks now were Brampton no 2's with no damping mechanism; these were perhaps the weakest part of the new set up.

Power was provided by a new ‘sports’ JAP double camshaft engine. Power output was up by 5 BHP to 30BHP. This gave a guaranteed 80MPH and in 1924 was enough to outpace virtually anything else on the public roads. The engine now was supplied with a full mechanical oil pump freeing the rider from having to remember to manually supply oil to the engine whilst in motion.

A Brooklands certificate stating that the complete machine as delivered to the customer has exceeded 80MPH could be supplied at an extra cost.

The SS80 offered the option of a vastly improved Lucas lighting system. Twist grip handlebar controls could be specified as well as tool bags, front and rear stand, and a luggage carrier. Cast alloy exhaust coolers and silencers gave a very desirable up to date look to the bike.

At £150  fully equipped, this was an extremely expensive bike when the average weekly wage was less than £3.

Many successes in major competitions such as the London to Edinburgh, Exeter and Lands End Trials, as well as racing and sprinting gave George Brough and his company wonderful publicity and kudos.

As a result 176 of this model were produced and many UK and overseas agent appointed.

Total sales had risen from just over 100 per annum in 1922 and 1923 to nearly 200 in 1924. This encouraged more development leading to the announcement in the December Motorcycle Show of the brand new SS100 which would set the ultimate standard for motorcycles right up to the outbreak of war in 1939.